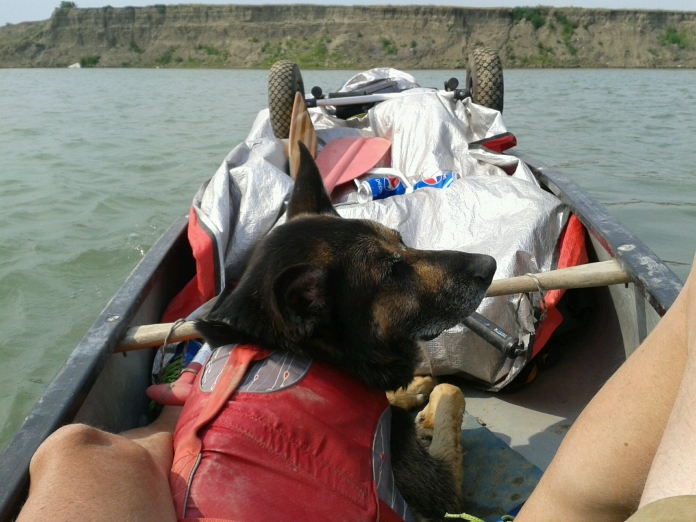 So here we are. At the beginning. I have come to the decision not to continue the canoe trip down the Missouri river this paddling season.

The decision was easy.

Any type of long distance journey has inherent risks. Illness, injury, or disability that can conclude in death of a team member.  I use risk evaluation constantly to minimize the potential of these things occuring.

You see this has been a two member team of one dog and one man. Has been that way for ten years. We have gone all over the USA. 99% Of the time it is to someplace remote, mountains, deserts but we really love going to places they call “Wilderness”

The large open wound that Zeusy is carrying in his chest will take time to heal. He is also showing signs of being easily fatigued from his injury.

It is not worth the risk.

A quick risk evalution shows he is at risk for further complications if the wound becomes infected. His fatigue shows that he is probably not capable of self rescue if we wind up in the water. The Missouri’s is wide with quick currents.

It is not worth the risk.

He is an important part of this human-dog team. He has been vital in his role. When going up river, stuck on large sandbars and hauling the canoe distances overland to the river he has been incredible. I hook his leash to my belt, I grab the canoe or it’s ropes and yell “Go! ” He is a powerful one hundred pound German Shepherd and pulls me easily as we both pull the canoe and gear.

His role as security, tent warmer, comedic relief and protector has been invaluable as well.

He has also been friend maker too!  Charming Kendar and Marshal at James Kipp. Melissa on the Turnbull ranch was enthused by him. Shyanne,  Josh and others produced  huge smiles when the formal introductions were made and he raises his paw to shake their hands when the greeting of “Nice to meet you,” was spoken to a dog who likes meeting new people.

One of the funniest things said to me as he took off at lightning speed down river to chase waves was ” I think your dog is going to beat you back to St. Louis.” 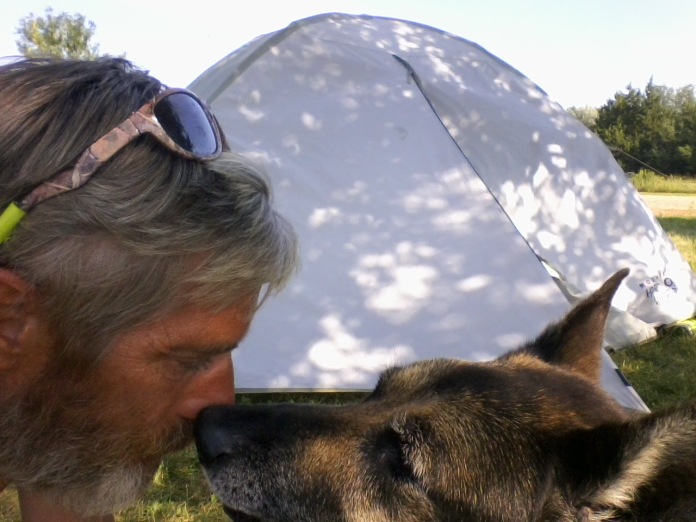 So here we are. At the beginning. The last two months has been one of the most incredible experiences for both of us.

It has never been about point A to point B. It is everything in between those two points that make a journey. The points are just the start and the end.

“This is the end” your mind is saying. No not hardly, this is a travel blog. That is what we do. Travel and share it with you.

There is next paddle season to try and complete the Missouri. Plus the fact that we are still in North Dakota and I scored a job at Bayside Resort in Linton, ND for a few months. At least until we head to St. Louis and then the East Coast. Still many places, animals, people and things to experience.

Besides there is still a ton to share from the last few months.

Thanks so much for following our story!