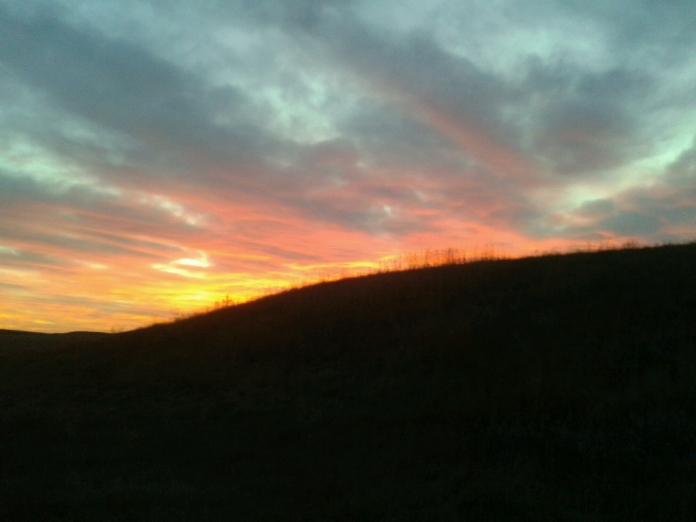 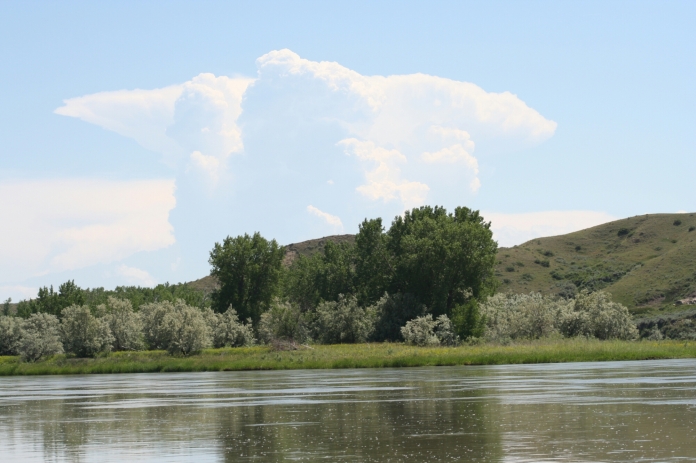 It was parked. Lost some stuff. Going to be hard getting that water out.

But rain cover ripped any way. Great thing my Grandmother Payne taught me basics of sewing. 9″ rip sewn up in no time! 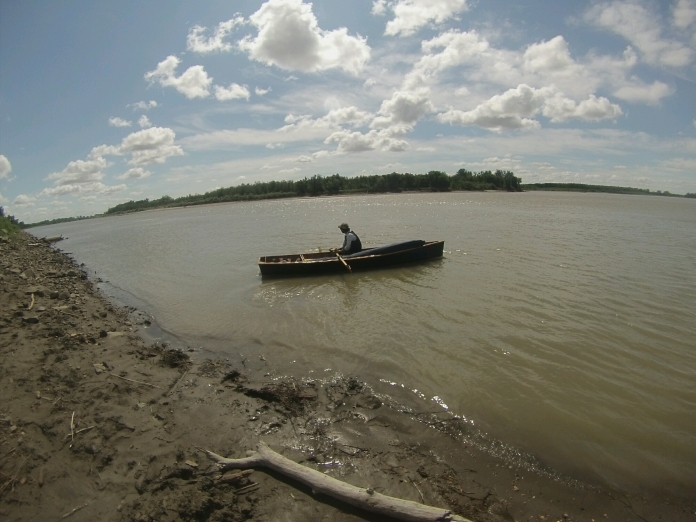 A Great Plains afternoon thunderstorm hit as me and big dog ducked inside the tent for awhile as the sky opened up and poured.

In the middle of it I kept believing that I heard footsteps. Thinking it was some of the girl scouts from the other end of the campground. They are little ones, what were they doing running around in such a storm?  I poked my head out.

I did a double take and between my spot and the next one was a fantastic looking blue boat.

For a second I thought the rain gods had blessed me.

Snapping out of my fantasy I saw the owner walking to the shelter carrying his equipment.

Zeusy and I came out of the tent and a few moments later we met Morely.

Morely, originally from upstate NY now living in Idaho was in transition. He was moving back to NY via the Missouri river. Ft Benton, MT. to St. Louis, Mo.

A lifelong sailor who is educated as an engineer, he designed and built the blue boat.

A beauty operated by oars or sail, weighing less than 100 lbs with a draft of about four inches.

The evening went on and after pulling up my chair he indulged my tobacco habit by teaching me to smoke a pipe. This after I hooked him up with a can of hot beef stew Jake, Waylon, and Blake gave me. It wouldn’t be right not to extend to this guy just caught out in a storm the same incredible generosity these three good men gave to me.

The evening wore on with great conversation about how we got here and anecdotes of our adventures.

Bed time came creeping in and he was continuing in the morning, and I was being re-supplied by my dear friend and sailor Catherine as well.  I was excited. It was going to be a good day indeed!

Morning came with very hard pushing sustained winds and Morely was soon off quickly pulling the oars of the fantastic blue boat into the current of a river that still draws people looking for adventure!

Crazy high winds, some rain and threat of thunderstorms here at North Dakota just downstream from Montana. Zeusy is tired of listening to the weather radio. He is going to bed.  Goodnight!

In Eastern Montana you can watch a storm coming at you from the middle of the river for a long time. You can see forever here. It is part of the beauty. Wide open spaces wherever you turn.

Zeusy and I was watching one for 45 minutes and as it grew closer a strong wind gust hit us right in the noses. The canoe was pushed sideways and the wind carried us 500 ft upriver. Time to hunker down.

The only landing I could find was a long mudbank. As I watched the lightning streak out of the sky and hit the ground the mudbank was all I had.

I steered in and Zeusy jumped out and headed for the trees. I got out of the boat and sunk to my knees in the most clingy hard to walk mud.

Then I heard a goose calling loudly from the bush. Then it came flying out and landed in the river. Followed by Zeusy who thought it wise to leap into the river and swim for the goose.

I screamed above the now high winds for him to return but could not chase him. I was still stuck in the mud with about three minutes until storm time.

He returned knowing I was mad. I made him stay on the bank while I struggled in the mud. I grabbed the gunwale of the canoe to bring it with me. I couldn’t loose it. The river is a long way off from any help.

Just then I looked down and saw four eyes. I had two mice in the form of stowaways. Looking me dead in the eye. Desperate, all I could do was to plead with them ” Please get out! ”

I pulled my left foot out only to feel the sandal rip. It was now only around my ankle. It helped!  Mud is best negotiated barefoot.

So I finally got on solid ground, put on my raincoat and backpack, staked down the canoe and walked exhausted in my one broken sandle, and knee high mud into the bush.

I sat down, Zeusy laying next to me as the storm hit hard. I had one hand on monster dawg as I bowed my head from the storm. It friggin’ poured!

I then smelled a familiar odor. I had sat in a mint patch!  Imagine the great luck!  I sat and chewed on mint leaves for the 30 minutes the storm hit us hard. Even small hail for the reminder of who was boss. The planet I love.

Zeusy did not like the mint. No ranch dressing I guess.