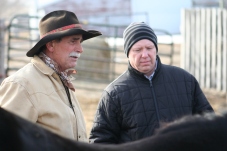 Frank is telling the Nokota horse’s story,  and calling for the return of the Nokotas to the Theodore Roosevelt National Park here in North Dakota. You see that is where Frank and his brother Leo got the original Nokotas from.

The National Park Service for many many decades tried to exterminate Wild Horses from the Parks. Yes, seriously ! No joke !

Over the years due to public pressure their policies have changed towards better.  But this is not before they allowed certain ranchers to introduce other breeds to influence the herds currently in the park. Such as a Shire and an Arabian. Now why would you do that ? Doesn’t make sense to me for any reason.

So Frank and Leo Kuntz started buying up horses over thirty years ago that were specific to what is now the Nokota of breed of horse. You see these horses have been documented as having a direct lineage to belonging to Sitting Bull’s Band the Hunkpapa Lakota Sioux. Do you know their story?

They fought against intrusion from the likes of Custer, and other so called way over glorified “Indian Fighters.” Well the Hunkpapa were one band of many who lost. They lost their way of living, their homes, their culture and especially their horses.

So I , yes me, the writer of these words has to be convinced that the original extermination practices of horses in the National Park Service did not go hand in hand with the attempt to exterminate any culture that fought for their freedom in the Northern Plains. Good luck convincing me any different. History does show the truth.

And we as Americans learn from mistakes in our past and we correct them. We do ! My nation has a conscience that makes thing better ! I know it does ! It is one of the things I love about where I am standing.

I support Frank Kuntz’s call to return the Nokotas to the Theodore Roosevelt National Park.  Remember these are my thoughts and reasoning, For me it is simply the right thing to do.

But I challenge you to allow Frank to be the voice for the horses he has spent everyday taking care of. Listen to his reasons. They are much more diverse and knowledgeable than mine.

It is worth the time to listen.

Click the link and check ’em, check ’em out !

Here it is !  Nokota Horse

Ps:  The word Nokota is trademarked by the Nokota Horse Conservancy

One thought on “Da News”